FIBROIDS - what are they and can they affect fertility? 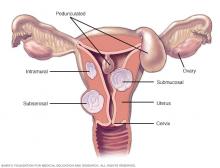 WHAT ARE FIBROIDS?
A fibroid is a benign tumour, basically a ball of muscle occurring in the uterus. It can be located within the wall (intramural), outside the wall (subserosal) or extending into the cavity (submucosal). Cancer in fibroids is rare.

HOW COMMON ARE FIBROIDS?
Fibroids are a common finding on ultrasound occurring in up to 70% of Caucasian women and even 90 % in some groups such as African Americans by age 50. Fibroids are found in younger women too and can cause concern when found in a woman who is trying to fall pregnant or who has experienced miscarriage.

CAN FIBROIDS AFFECT FERTILITY OR AN IVF CYCLE?
Those growing outside the uterus do not affect fertility. Submucosal fibroids which distort the cavity of the uterus are associated with infertility and miscarriage. It is thought they alter local blood flow or endometrial function. Removal will usually be recommended in these cases.
Whether intramural fibroids affect fertility is controversial.
A recent study published in the British Journal of Obstetrics and Gynaecology attempted to evaluate their impact. Women with fibroids not distorting the cavity and having IVF were matched with two controls with no fibroids. They were matched for age, starting dose of FSH medication, stage of embryo transferred (day 3 or day 5) and number of embryos transferred. No differences were seen in the groups. The group consisted of 163 women with fibroids and 326 without.
Results:
1. Fibroids less than 3 cm in size did not negatively affect outcome but in women with larger ones the pregnancy rate and live births were lower.
2. In women with a single fibroid pregnancy rate and live birth was similar to women with no fibroids, but in those with two or more they were significantly lower.
3. Overall clinical pregnancy (32.5% vs 42.6 %) and live births (26.9% vs 37.4%) were significantly lower.
The reason for this is unknown. It is also unknown whether removing or treating them will alter outcome. The question then is what to do? Surgical removal risks scarring and compromising uterine wall strength in addition to the risk of surgery itself. It has not been shown to increase pregnancy rates unless the fibroid is in the cavity.

HOW ARE FIBROIDS TREATED?
Surgical removal is the most common course of treatment. Embolisation (blocking blood supply with tiny beads or coils) or drug suppression with hormones are alternatives to surgery. There are no studies of the effect on success of these approaches.
Individual discussion between patient and doctor is recommended on the best path forward especially in those with recurrent pregnancy loss or repeated IVF failure.