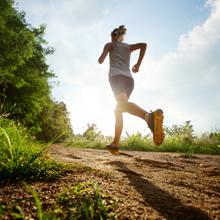 Traditionally we have been told that to get health benefit from exercise we need to do it for 40-60 minutes 3 times a week. But is this actually true?? Or can we get all the health and weight loss benefits in far less time. Increasingly the answer seems to be “YES”. In his new book “Fast Exercise” Dr Michael Mosley discusses the available research on exercise and particularly High Intensity Training (HIT).

There is a growing body of research to suggest that we can get all the benefits –increased aerobic fitness and endurance, reduced fat mass and improved insulin sensitivity in only 3 minutes of intense exercise a week.

Generally it has been accepted that moderate intensity exercise improves health and decreases death from cardiovascular disease, stroke and cancer. It will lower blood sugar which decreases the risk of diabetes. It is good for your bones and your brain (dementia risk).

But does everyone get the same benefit?? And how much is enough?? Will it help weight loss?

One of the major reasons people exercise is that they hope it will help weight loss- is this actually true?? Unfortunately moderate intensity exercise does not burn much fat. Fat is incredibly energy dense and you need to do a lot to burn it. Net calorie burn ( ie what you loss by doing an activity as compared to sitting still) is not the same as Total Calorie burn (TCB) which is often given on activity charts. You can roughly calculate it

To give a perspective if you run a mile and reward yourself with a banana (90-100cals) you are almost even; make it a large muffin (520 calories) and latte (180 calories) you will actually have a net gain of over 600 calories.

Many studies show that when people exercise they automatically eat more as compensation as the body attempts to maintain it’s set point of weight. The body also acts to decrease your metabolic rate if it perceives a deficit developing.

So what about HIT ? Studies consistently show that HIT will get you aerobically fitter faster than conventional training, and will improve insulin sensitivity and fat loss more efficiently than moderate exercise. Even elite athletes benefit from the addition of HIT to training regimes.

One of the reasons is the effect it has on the mitochrondria. These are the power houses of all cells. HIT increases the number of active mitochrondria in skeletal and heart muscle so that they work harder and more efficiently. As you get more mitochrondria you will also burn more fat while exercising, and afterwards as the muscles recover. The metabolic stress of the workout will also releases stress hormones (catecholamines) which target the release of abdominal/visceral fat for energy (this is the bad guy for disease risk). In addition HIT suppresses appetite in ways that moderate exercise does not.

How much is enough then? On an exercise bike 20-30 seconds cycling full out, repeated 2-3 times a session and performed three times a week. A few minutes of gentle cycling to warm up and cool down and between bursts. All over in 5 minutes. Resistance can be increased as you get stronger. Or run for 20 seconds at a flat-out sprint, repeated after a short rest; this can be incorporated into a gentle run or even walk.

Obviously people exercise for many reasons. Some actually like it! some like the company of the gym or team sports; many do it for health benefit and overall sense of well-being. Keeping generally active (using stairs, walking , not sitting for long periods without moving) will increase your metabolism too and aids any program.

To lose weight calorie intake must also be controlled. Check out “Fast Diet” by Dr Mosley for an approach involving Intermittent Fasting. I have personally found this useful and so have many people I know.

So no excuses now that you don’t have time !!! It could be the start of a healthier and happier life (Exercise also boosts mood) .